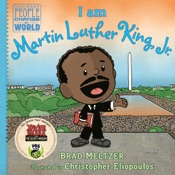 We can all be heroes. That’s the inspiring message of this New York Times Bestselling picture book biography series from historian and author Brad Meltzer.

Even as a child, Martin Luther King, Jr. was shocked by the terrible and unfair way African-American people were treated. When he grew up, he decided to do something about it—peacefully, with powerful words. He helped gather people together for nonviolent protests and marches, and he always spoke up about loving other human beings and doing what’s right. He spoke about the dream of a kinder future, and bravely led the way toward racial equality in America.

This lively, New York Times Bestselling biography series inspires kids to dream big, one great role model at a time. You’ll want to collect each book.
Top Reading Narcissus and Goldmund Finding Ashley Sooley Hour of the Witch Deadly Ever After A Villa in Sicily: Capers and a Calamity (A Cats and Dogs Cozy Mystery—Book 4) Royal Line Start with Why