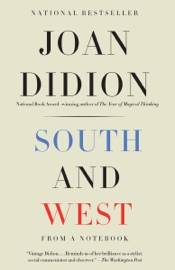 Joan Didion has always kept notebooks—of overheard dialogue, interviews, drafts of essays, copies of articles. Here are two extended excerpts from notebooks she kept in the 1970s; read together, they form a piercing view of the American political and cultural landscape.

*One of the Best Books of the Year: NPR, Harper's Bazaar*

“Notes on the South” traces a road trip that she and her husband, John Gregory Dunne, took through Louisiana, Mississippi, and Alabama. Her acute observations about the small towns they pass through, her interviews with local figures, and their preoccupation with race, class, and heritage suggest a South largely unchanged today.

“California Notes” began as an assignment from Rolling Stone on the Patty Hearst trial. Though Didion never wrote the piece, the time she spent watching the trial in San Francisco triggered thoughts about the West and her own upbringing in Sacramento. Here we not only see Didion’s signature irony and imagination in play, we’re also granted an illuminating glimpse into her mind and process.