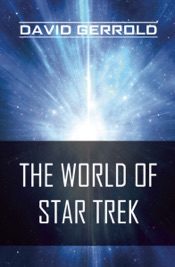 From the Nebula Award winner who wrote the “Trouble with Tribbles” episode—a behind-the-scenes look at the classic TV show.

In The World of Star Trek, screenwriter and science fiction legend David Gerrold reveals the people, places, and events that made Star Trek one of the most popular series ever. Gerrold discusses what was successful and what wasn’t, offering personal interviews with the show’s legendary stars and dissecting the trends that developed throughout the seasons.

Covering the original television series created by Gene Roddenberry and the phenomenal fandom it inspired—and updated to include the triumphant big-screen Star Trek films—this is a unique inside story of the Star Trek universe, from scriptwriters’ memos to special effects and more.
Top Reading The Science of Spice Ocean Prey Just Friends From Blood and Ash A Kingdom of Flesh and Fire The Terminal List Fragments of Light A Baby for the Lumberjacks