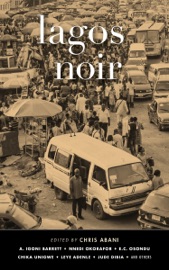 “A stellar cast of award-winning Nigerian authors . . . a must-read for crime lovers looking for something different.”—Brittle Paper

In Akashic Books’s acclaimed series of original noir anthologies, each book comprises all new stories set in a distinct neighborhood or location within the respective city. Now, West Africa enters the Noir Series arena, meticulously edited by one of Nigeria’s best-known authors.

In Lagos Noir, the stories are set in “a city of more than 21 million and an amazing amalgam of wealth, poverty, corruption, humor, bravery, and tragedy. Abani and a dozen other contributors tell stories that are both unique to Lagos and universal in their humanity . . . This entry stands as one of the strongest recent additions to Akashic’s popular noir series” (Publishers Weekly, starred review, pick of the week).

“The beauty of this book, which contains 13 stories from Nigerian writers, is that it serves as a travelogue, too.”—Bloomberg, “The Darkest Summer Reading List for Those Bright, Beachy Days”

“With writers like Igoni Barrett, Leye Adenle, and E.C. Osondu contributing, Lagos Noir offers wildly different perspectives on both the city itself and the state of noir fiction. This book is almost like a world in itself, one that you’ll want to dive back into and get lost in again and again.”—CrimeReads, “One of the 10 Best Crime Anthologies of 2018”
Top Reading Black Knight Freed Amazon Unbound Shadow and Bone Killing the Mob Badass Habits The Premonition: A Pandemic Story Web of Sin