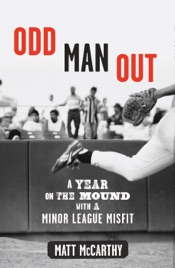 A hilairious inside baseball account of year in the minor leagues

Odd Man Out captures the gritty essence of our national pastime as it is played outside the spot­light. Matt McCarthy, a decent left-handed starting pitcher on one of the worst squads in Yale history, earned a ticket to spring training as the twenty-sixth-round draft pick of the 2002 Anaheim Angels. This is the hilarious inside story of his year with the Provo Angels, Anaheim's minor league affiliate in the heart of Mormon country, as McCarthy navigates the ups and downs of an antic, grueling season, filled with cross-country bus trips, bizarre rivalries, and wild locker-room hijinks.
Top Reading From Blood and Ash Summer on the Bluffs The Soul of an Octopus A Court of Thorns and Roses To The Rude Guy in Apartment Five The Crown of Gilded Bones The Long Call How Much I Feel