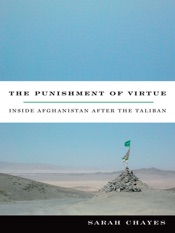 As a former star reporter for NPR, Sarah Chayes developed a devoted listenership for her on-site reports on conflicts around the world. In The Punishment of Virtue, she reveals the misguided U.S. policy in Afghanistan in the wake of the defeat of the Taliban, which has severely undermined the effort to build democracy and allowed corrupt tribal warlords back into positions of power and the Taliban to re-infiltrate the country. This is an eyeopening chronicle that highlights the often infuriating realities of a vital front in the war on terror, exposing deeper, fundamental problems with current U.S. strategy.
Top Reading Love in a Mist (Book 4 Devereux Series) Shadow and Bone 365 Days Loud Mouth The Subtle Art of Not Giving a F*ck The Quick Red Fox That Summer While Justice Sleeps