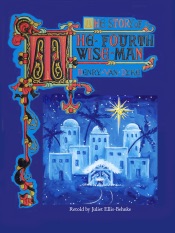 ou know the story of the Three Wise Men of the East, and how they traveled from far away to offer their gifts at the manger-cradle in Bethlehem. But have you ever heard the story of the Fourth Wise Man, who also saw the star rising and set out to follow it, yet did not arrive with the other Magi? The story is an addition and expansion of the account of the Biblical Magi, recounted in the Gospel of Matthew in the New Testament. It tells about a "fourth" wise man (assuming the tradition that the Magi numbered three to be true), a priest of the Magi named Artaban, from Persia. Like the other Magi, he sees signs in the heavens proclaiming that a King had been born among the Jews. Like them, he sets out to see the newborn ruler, carrying treasures to give as gifts to the child - a sapphire, a ruby, and a "pearl of great price". However, he stops along the way to help a dying man, which makes him late to meet with the caravan of the other three Wise Men. He then begins his journey alone, but arrives in Bethlehem three days late, too late to see the child, whose parents have fled to Egypt. After thirty-three years, Artaban is still a pilgrim, still searching for the King. He arrives in Jerusalem in time for the crucifixion of Jesus. After being hit on the head by a falling tile, a voice tells him "Verily I say unto you, inasmuch as you have done it unto one of the least of these my brethren, you have done it unto me," and he dies in a calm radiance of wonder and joy. His treasures were accepted, and the Fourth Wise Man found his King.
Top Reading Off the Record Mercy The Terminal List 21st Birthday China Natalie Wood The Last Thing He Told Me The Chase